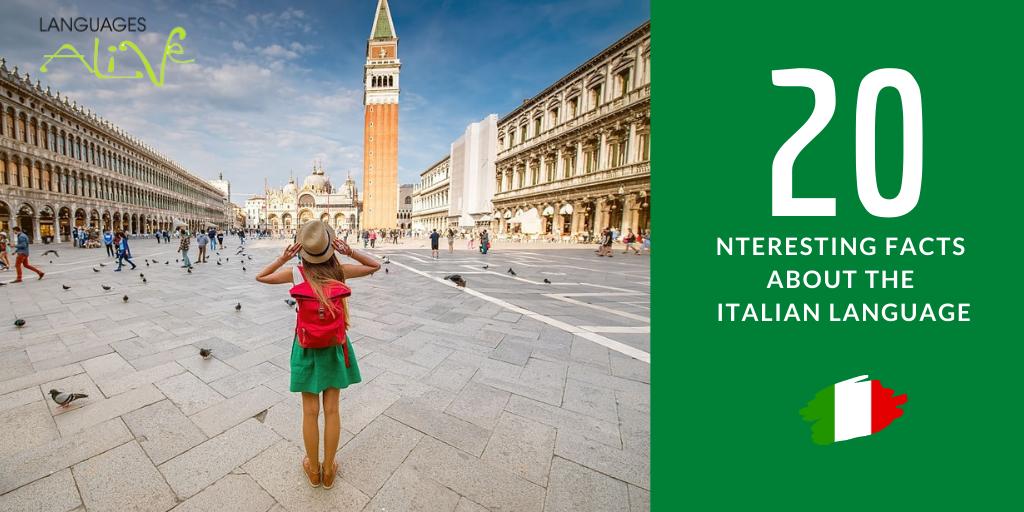 It is well known how Italy excels for uniqueness – think of its millennial history, the stunning architecture, the beautiful art, the fascinating nature, and of course, its delicious food.

Perhaps it is less well known how unique and intriguing the Italian language is. If you’re thinking about learning Italian or you are currently studying it, it’s good to have a little knowledge about the origins, history and fun facts of one of the most beautiful languages in the world. Before we start, I would like to offer you a free Italian language lesson, please sign up by clicking on this link https://www.languagesalive.com/learn-italian-online/

1. The alphabet has only 21 letters

Italians love to keep things sweet and simple – think of how simple but still outstanding their food is; of course, their alphabet is no exception. The Italian alphabet, which derives from the Latin one, contains only 21 letters, being j, k, w, x, and y not included in it. 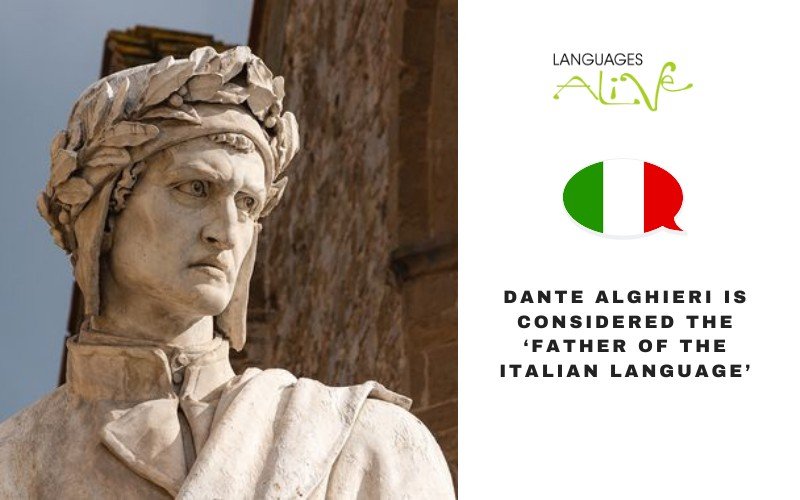 2. Italian is a Romance language derived from Latin

Over the centuries, the language spoken in the Italian peninsula slowly evolved from Latin into many different local dialects. At the end of the Middle Age, due to the central location of Florence and its thriving economy, the Tuscan vernacular became the most popular spoken dialect. This was a primordial vulgar version of the Italian language, as we know it today.

Dante Alghieri, a Florentine writer, poet, as well as a political thinker, is considered the ‘Father of the Italian Language’; most of his works and most importantly his masterpiece The Divine Comedy (1308-1320) were entirely written in vulgar.

3. Italian is the language of luxury item manufactures

As the official language of Italy and Switzerland, Italian can be said to be the language of luxury item manufacturers. On top of the home-grown brands there, many international brands have sought to enter the market of these two countries over the years.

We have a good Italian language resource for knowing more about Italian translation services. So if you’re looking for an opportunity to be involved in luxury products and in the language industry, studying Italian might be a good way to get started. Of course, you will have to be more than just fluent in the language.

4. The first-ever Italian language text is over 1,000 years old

In the 14th century, a lot of literature, especially poems, began to be written and published in Italian – think of the works by Petrarca or Boccaccio, but the very first texts written in a vernacular resembling what we now recognise as an early Italian language, actually date back to the years 960–963. These texts are known as the Placiti Cassinesi and consist of four juridical documents that dealt with a land ownership dispute between southern Italian monasteries located in Cassino, near the city of Capua. 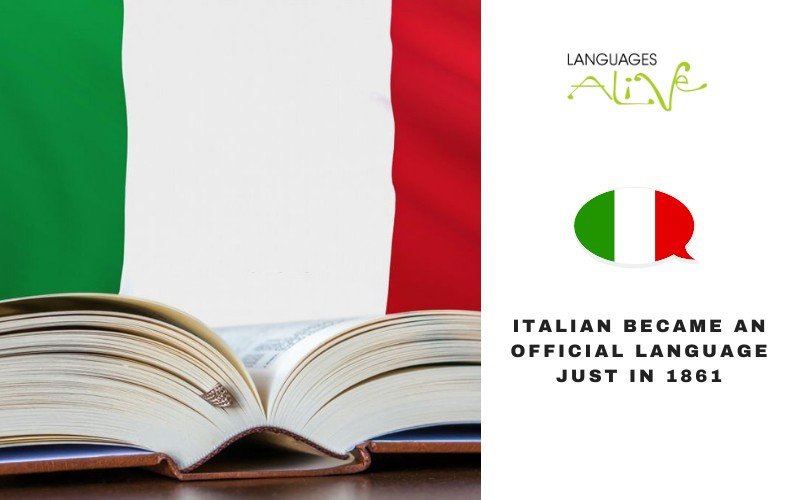 1861 is the year that marks the geopolitical unification of Italy and the recognition of the standardised Italian as its primary language. At that time, the Italian language as we know it today, was regularly spoken by less than 3-5% of the population living in the newly unified country.

6. Italian dialects are so many and so different from one another

To this day, in Italy, there are numerous dialects that vary from region to region, from town to town, and even from village to village. The variety of dialect languages developed independently from Latin and for centuries, up until 1861.Italy was divided into a number of different states under foreign rule, where each had its own regional language coexisting with the standard Italian.

7. Standardised Italian spread thanks to television

The introduction of television in the 1950s and 1960s played a strategic role in the spread of standardised Italian. In the 1960s, thanks to Non è mai troppo tardi (It’s never too late), a show aired on Rai1 – the national TV channel, an estimated one and a half million illiterate people learned to read and write in Italian.

8. The most widely spoken regional dialect is Neapolitan

With over five million speakers, strict grammatical rules and even strong similarities to foreign languages such as Spanish and Catalan, the most widely spoken regional dialect in Italy is Neapolitan.

The first publication of a Vocabulary of the Italian language dates back to the 17th century. Since then, Italian also entered by right in scientific texts and official documents, definitively replacing the use of Latin.

10. According to the Italian Constitution, Italian is not an official national language

Although Italian is the de facto the language of the nation – being it spoken as a native tongue by approximately 93% of the population, there is no mention in the Constitution of the Italian Republic that Italian is an official national language.

11. Italian was also the language of many former colonies

During the colonisation era of the early 20th century, Italian was a primary language spoken in the Italian colonies of Libya, Eritrea and Somalia. 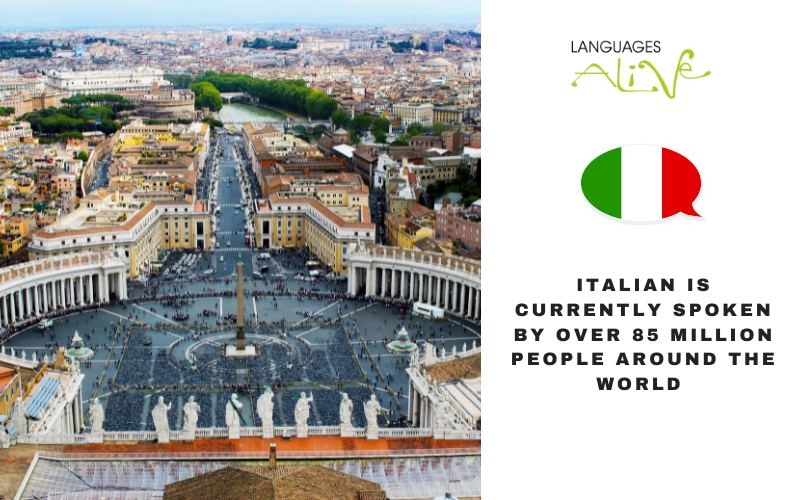 12. Italian is currently spoken by over 85 million people around the world

When it comes to the actual number of speakers, Italian can’t compete with languages like English, Mandarin or Spanish. Yet, Italian is one of the most popular and influential languages in the world.

13. Italian is one of the most studied foreign languages in the world

According to a study published in 2019, Italian is the fourth most studied language in the world, preceded only by English, Spanish and Chinese. 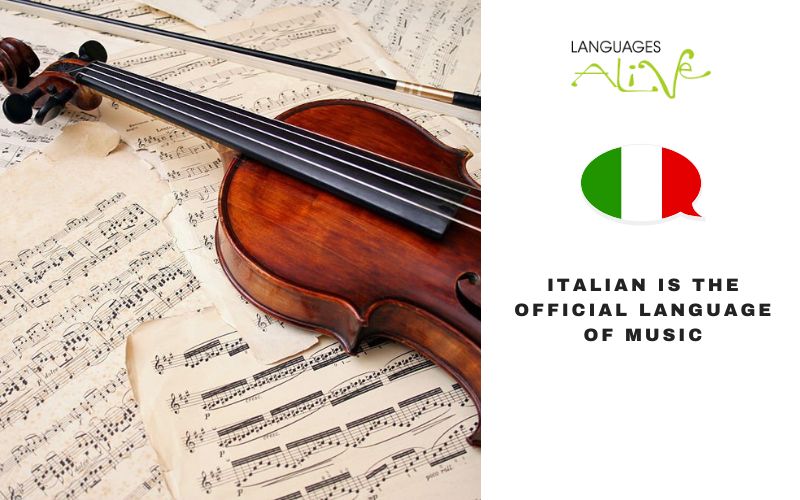 14. Italian is the official language of music

If you play an instrument or are familiar with classical music, you must know the meaning of terms like crescendo, soprano, alto, and tempo. All these words have Italian origins and this phenomenon is due to Italian music notation becoming popularised during the Renaissance and Baroque periods. Italian became the standard language for music compositions and at that time, many prominent composers were in fact Italian.

15. Influence of Italian over the English language

The list of words that are commonly used in English and have Italian origins is very, very long – maybe this is a good topic for the next article?

16. Italian has many unique words that aren’t easy to translate

As it happens in many other languages, also in Italian there are many words that do not find a translation or direct correspondence in English. These two are my favourite ones – that also say so much about Italians and being Italian:

Abbiocco = a sudden bout of sleepiness after a hearty meal

The word volt comes from the name of Alessandro Volta, an Italian physicist, chemist, and inventor. As we all know Thomas Edison invented the light bulb, but his invention would have been pointless without Alessandro Volta that in 1799 created the Voltaic pile, the first electrical battery. His last name is where we get the word volt from, which is the standard measuring unit of electricity. 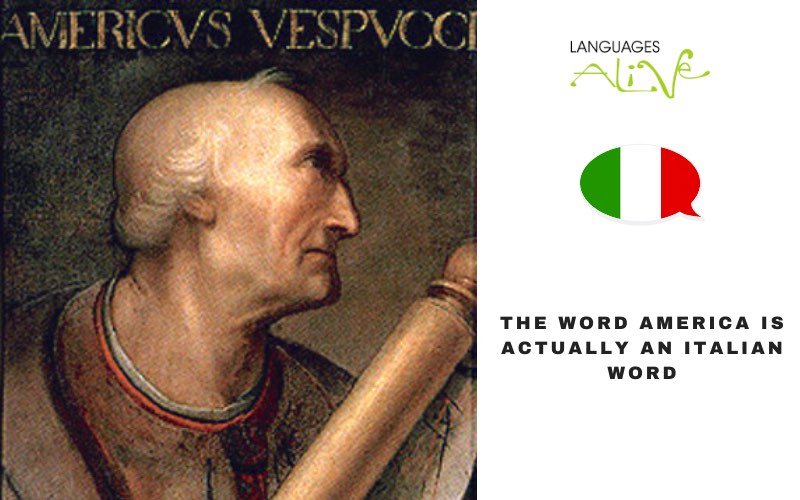 18. The word America is actually an Italian word

America is the Latinised version of Amerigo, the given name of the Italian explorer Amerigo Vespucci who introduced the then-revolutionary concept that the lands that Christopher Columbus sailed to in 1492 were not part of Asia but the so-called ‘New World’.

Did you know that the jeans that you are wearing were born in Italy? The word comes from the Gênes (Genova in Italian), French word for the Genoa port city, where the sailors commonly used the denim fabric to protect their goods from the elements.

20. The longest Italian word has 30 letters

This may be the funniest fact about the Italian language. In the Italian dictionary, there is a word made of 30 letters and 13 syllables: psiconeuroendocrinoimmunologia. This is today’s longest Italian word and the term (acronym PNEI) refers to the study of nervous, immune, and endocrine system functions.

Other very long – and funny-sounding – Italian words are precipitevolissimevolmente, which stands for ‘in a way like someone or something that acts very hastily’, particolareggiatissimamente, ‘in an extremely detailed way’ and anticostituzionalissimamente. ‘in a way that strongly violates the constitution’. 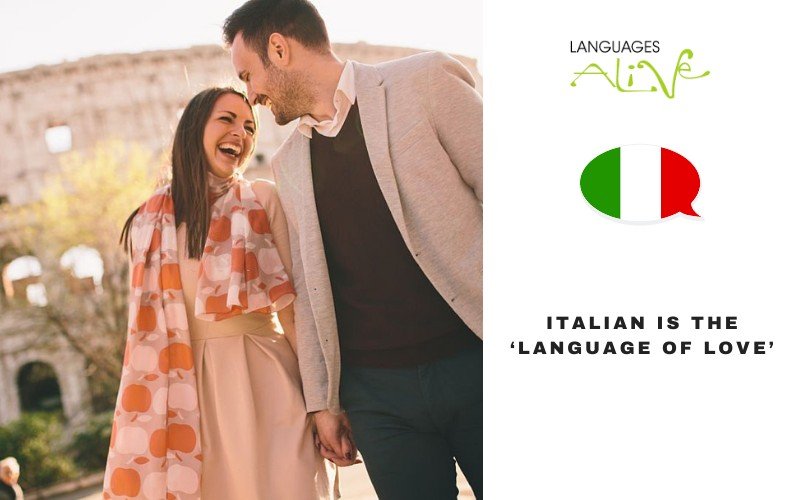 And of course, Italian is the ‘language of love’

Have you ever wondered why many consider Italian the so-called ‘language of love’? Italian seems to be the language with the sexiest accent and this is potentially due to its melodic nature. The number of words ending in a vowel and the lack of consonant clusters can be held responsible for its innate sensuality.

If you are interested in learning Italian, I would be happy to help! Please get in touch for a free consultation by clicking here or send an email to raffaella@languagesalive.com.

You can also find me on my YouTube channel with many engaging video lessons for beginner and elementary levels. More levels coming up.

How to express feelings in Italian