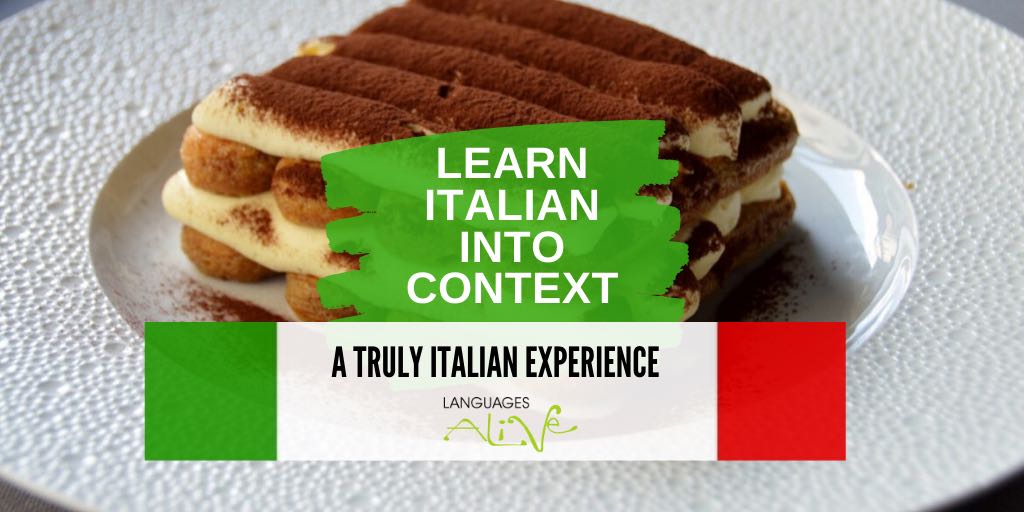 The effective and fun way to learn a language

Have you ever noticed how difficult it is to remember Italian vocabulary or phrases when you learn them randomly?  By “randomly”, I mean outside the context of an experience related to the Italian language.

Research shows that in order to avoid  “Systematic forgetting” words and phrases must be learned into context. Hence, you should avoid learning from vocabulary lists, phrase books, apps which lack of structure and so on.

The good news is by putting words into context you give them meaning and meaningfulness is vital for storing those words into the long memory.

This is the reason I decided to create a video version called live & learn Italian which have been delivering face to face for years. Live and learn Italian will catch your attention making you learn the Italian language effectively and in an enjoyable way.

This is not all; you will also have the opportunity to absorb the Italian culture without lifting a finger.

So here is my first video mini experience, below a mini fun test to practise what you learned.

It was fun wasn’t it?

Here 10 Italian idioms related to food which will make your day.

“Let’s call a spade a spade.” They’ll call it as it is. There’ll be no “sugar coating” and no “beating around the bush.” If they think you’re a bad singer, they’ll tell you so. If they think your cooking sucks, you’ll hear about it.

Literally: all smoke and no roast.
Meaning: all talk and no action.

You are always in the way like parsley or mingling with things that are none of your business.
The meaning refers to the vast use of parsley in the Italian cuisine

Literally to have ham on the eyes

Meaning: If your eyes are covered by ham you can’t see what is going on or you pretend not to see, surely much more picturesque and funnier than simply burying your head in the sand like an ostrich, don’t you believe?

Literally I am full as an egg

Meaning: I am stuffed

The world’s favourite Italian dessert became extremely popular in Florence in the 19th century among English intellectuals and artists. The dessert made then its way to England where its popularity grew quickly.

The traditional dessert doesn’t contain any alcohol and children in Italy can eat it at a young age even though it contains coffee.

In the dictionaries since 1983.

This word entered the Italian dictionary very quickly. The first Italian vocabulary that certifies its existence, almost simultaneously with its appearance in cookbooks, is Zingarelli, who wrote: “Dessert made from sponge cake soaked in coffee and layered with a cream made of eggs mixed with mascarpone, sugar and whipped cream, all covered with a little bit of chocolate powder and served cold”.

In 1989 also the Oxford Dictionary introduced the word tiramisu

Many terms of Italian cuisine have become international: pizza, pasta, espresso, spaghetti. The “Academia italiana della Crusca” has certified that tiramisu is now present as “Italian gastronomic term” in 23 different languages. In China is the most clicked Italian word on the web.

The largest tiramisu ever prepared was in Gemona (Udine), Friuli Venezia Giulia: 3015 kg of delicacy certified by Guiness World Record.

Tip: In Italian tiramisu has an accent on the u so it reads tiramisù

The Top 10 Beaches to visit in Italy