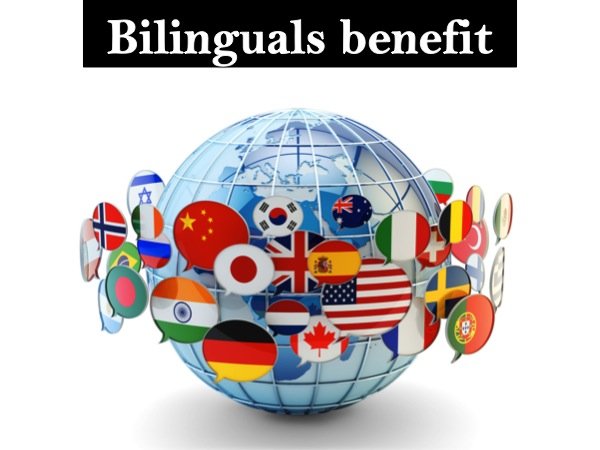 Most recently a prominent researcher in the field, Ellen Bialystok (2001, 2010, 2012), found evidence of advantages in bilingual children linked to metalinguistic awareness;  the skill to ponder and handle the elements of language independently of their communicative use.

Her research has concentrated on bilinguals who have a high command of both languages and use them regularly, proposing that low levels of bilingual proficiency or usage are inadequate to produce these cognitive advantages.

She refers to such advantages as “executive control functions” which consist of activation, selection, inhibition and coordination of information during the solving of conflicts or planning. In other words, Bialystok has argued that such cognitive advantages are given by the use of selective attention and inhibition functions that highly proficient bilinguals employ in order to channel misleading information, sequentially  inhibited to avoid interference between two language systems.

The four groups were analysed and compared in their ability to carry out three verbal tasks, and one non-verbal executive control task, in order to study the generality of the bilingual effects on development. Even though, the bilingual groups presented several differences in language similarity, cultural background, and language of schooling, they all performed alike in the executive control task and outperformed monolinguals.

On the other hand, only those bilinguals whose language of instruction was the same as the language of testing, attained the best performance on verbal tasks. These results endorse the assertion that bilingualism acts independently of those variables exhibited in the investigation.

Bialystok et al (2004) also demonstrated that the cognitive advantages related to dual language input and learning do not affect only children, but also adults. In addition, the scholars found out in their study in 2007, that the onset of dementia, in the case of bilingual and monolingual patients with the same clinical diagnosis, was delayed by 4 years in the bilingual patients.

Further, they help to dispel those bilingual myths which have led to a pessimistic view on the subject; indeed, for too long bilingual children have been considered to be not typically developing if they showed any differences in their development compared to monolingual children. Parents and educators should therefore consider the advantages that can derive from dual language learning in early development.

Start learning a modern language with us!

Is there a critical period for second language acquisition?