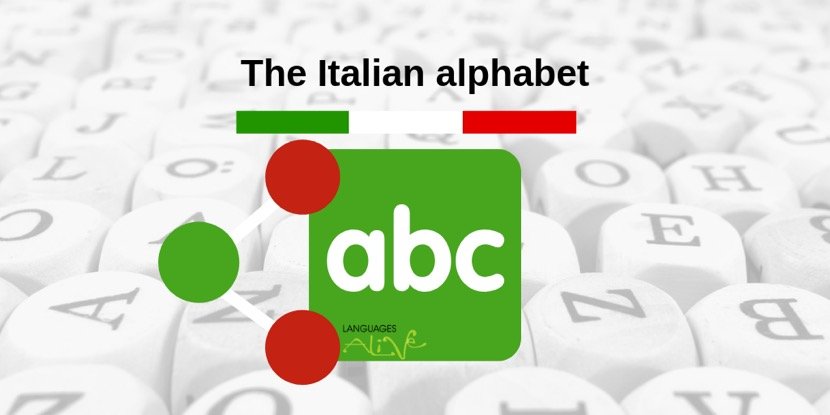 The Italian alphabet is composed of 21 letters. The extra 5 letters are used to write words of foreign origins and are the following:
J (i lunga), K (cappa), W (doppio/a V) X (ics) Y ipsilon
For instance: Jolly, Kiwi, Whisky, Xenofobia and Yogurt

A B C D E F G H I L M N O P Q R ST U V Z  is the official alphabet which we learned at school by heart. For the right pronunciation please click on this link which will take you to an audio I prepared personally.

Where is Italian spoken?

Italian (italiano) is part of the Romance languages and descends from the Latin of the Roman Empire. The Italian language is officially spoken in Italy of course, in parts of Switzerland and numerous Italian speakers are also present in Malta, San Marino (a tiny independent state inside the Italian territory), Croatia, Slovenia and France in particular in Corse (Corsica).

In addition, Italian is the second most spoken language in Argentina, whilst is no longer popular in Libya and Eritrea ex Italian colonies. 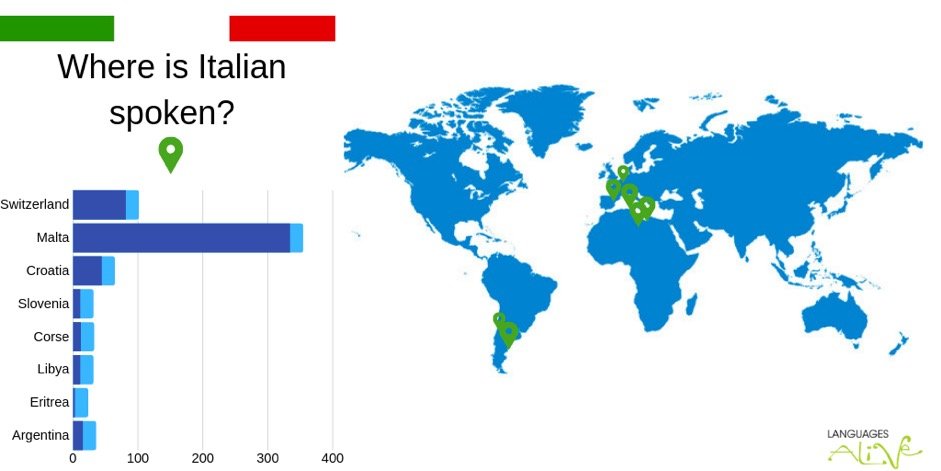 The role of Italian in the European Union

Italian plays a prominent role in the European community being one of the official languages of the Organisation for Security and Cooperation in Europe and one of the working languages of the Council of Europe. It is also the fourth most spoken language in European Union with 69 million of native speakers, but the total number of speakers around the globe reaches 90 million.

The Italian language is used as lingua franca in the Catholic hierarchy and it is the official language of the Sovereign Military Order of Malta.

The influence of Italian in other languages

From music terminology to food, design, literature, architecture, science and fashion, Italian has a strong impact on other languages. Who has never heard of ciao, pizza, spaghetti, cappuccino, propaganda, fiasco, barista, bruschetta, al dente?
Even if you are not into Opera, you surely heard of maestro, orchestra, solo, piano or you probably sang at cappella in the shower.

Other words have a different spelling but they are easy to understand like cattedrale (Cathedral) and teatro (theatre) for instance.
Other Italian words are called false friends as they do not have the same meaning when used in English for example confetti in Italian means sugar almonds and are commonly given to family and friends for special occasions such as marriage or first communion.

Other false friends are: camera which means room but in some regions can also indicate the bedroom. It can be camera d’albergo too (hotel room). The English camera translates in Italian in macchina fotografica!

Then we have a really common one; peperoni which in Italian means peppers not the hot salami on top of a pizza, instead we say salamino piccante.

Is Italian language hard to learn?

Contrary to general believes Italian is an easy language to learn due to the fact it mainly follows set grammatical rules. It might seem a lot to take in grammar wise, but once you get the grasp of it, you will be sure to navigate smoothly into the magic of the Italian language. Another advantage is you read every word as it is written, so it is vital you learn the alphabet pronunciation.

The latter is crystal clear with every vowel enunciated and the sing-song intonation makes easier to identify sounds. In addition, vocabulary is alike other languages derived from Latin. Besides the linguistic side of things, it is essential to take into consideration other factors which are not related to language but they contribute to second language attainment in adults.

First of all, studies have demonstrated there is a language aptitude that is language intelligence, which can be higher in certain individuals than others. For instance, this is the case for actors, who are able to recreate different accents easily. However, do not despair, most of us have a medium ability and we need to put effort into learning a second language. In addition, the second strongest factor is motivation, if you are motivated you will surely succeed. 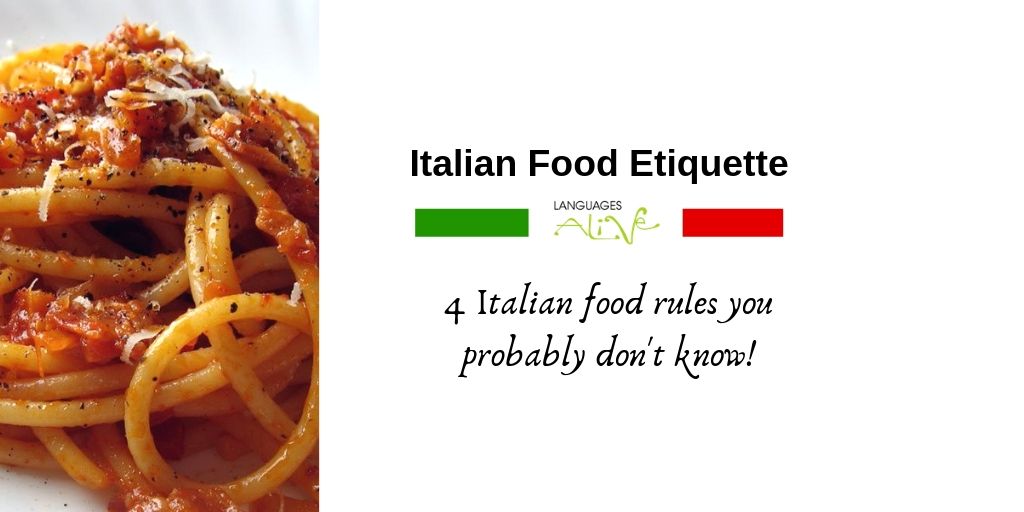 There is so much to say about this topic; however, for the purpose of this post we will keep this section short and concise.

How to address to someone informally and formally

In Italian we have two different ways to say you, that is “tu” and “Lei.”

We use “tu” when we are friends with the person we are speaking to or they are the same age as us outside a working context or any formal environment. For example if you ask for the time on the street to a person younger than you use the tu if not you need to use Lei. This indicates a form or respect and politeness towards someone older than us.
In a working environment we need to use Lei unless the person we are talking to asks to darci del tu (address each other with tu).Same, greeting s can also be divided into formal and informal.

*Ciao is used for hello and bye
*You can use buongiorno, buonasera e buonanotte also informally.
*Buona notte is only used when the night has finished and you go to sleep.

Do you want to know how to say have a good night?
Simple: Buona Serata!

Italians might say they do not believe in superstition but many won’t carry on walking ahead if a black cat crosses their path. This superstition is common in many countries.

One which doesn’t exist in the UK where I have been living for long time is opening an umbrella in an indoor space such as at home or a shop is bad luck. Does it exist in your country? I am very curious

That is all for now folks, have you enjoyed it? You can still carryon learning with my free lesson,click here to download! 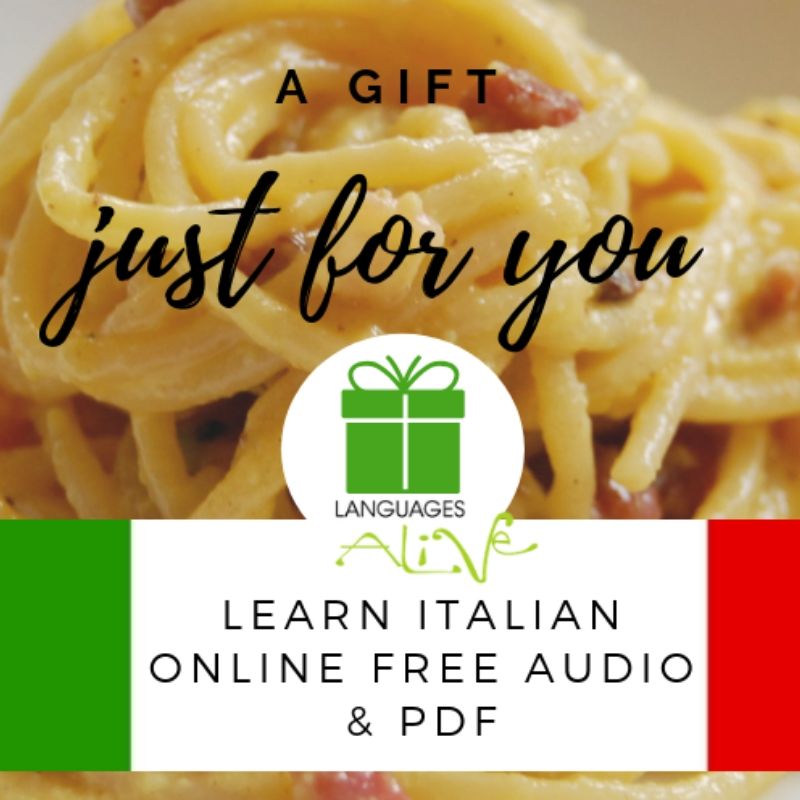 The best way to learn Italian for beginners