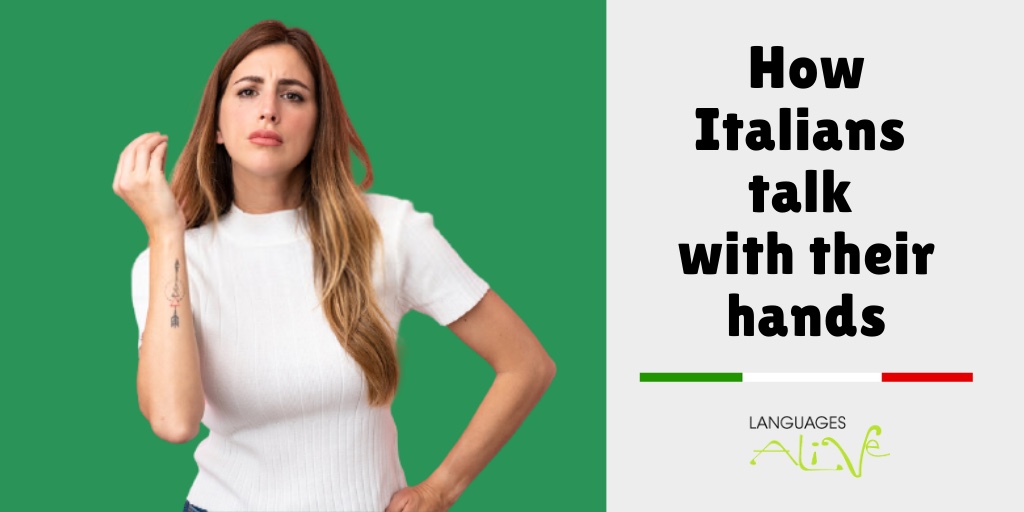 Among many other sayings and idiomatic expressions that are commonly used in everyday speech, there is one that Italian native speakers particularly cherish, which is “talking” with their hands. This also says so much about Italian cultural behaviour and communication habits as well as what it really means to be Italian. As Italians say: un gesto vale più di mille parole – meaning ‘a gesture is more valuable than a thousand words’. So let’s discover the most popular ones!

Bunch your fingers together, with tips touching and pointing upward. Hold your arm about a foot from your body. You can either hold your hand still or move it up and down at the wrist.

This gesture is so common in Italy that it’s been used to identify and mock Italians and it is also the subject of a meme that has become viral all over the internet (How Italians do different things, always keeping their hands in this gesture).

Move the side of the hand against your belly.

Extend the index finger and twist it into the cheek.

Touch tips of all fingers of one hand together and kiss them while moving the arm away from the mouth and extending the fingers.

Tap the top of your wrist with a finger.

Hands placed in prayer become a sort of supplication or can be used as rhetorical question.

Bunch ten fingers together and lift them to the same height as mouth, then kind of kiss the top of the fingers and move the hands away.

The thumb and index finger form a circle, with the other three fingers extended and draw a straight vertical line.

Extend the index finger and point it to one side of the head.

Use the index finger to tug at your bottom eyelid.

Bring the index fingers of both hands together to form an “x” in front of your mouth. This also signals that you will remain silent and not say a word

Extend one index finger and use it to draw a small circle in the air.

Andiamo a mangiare? – Shall we eat?

Index and middle finger imitate a fork picking up spaghetti and turn the elbow downwards.

Da cosí a cosí! – From this to that! (When there is a sudden dramatic change)

Place the palm of your hand facing downwards and then flip palm hand over to the facing upwards position.

With the palm facing inwards, flatten your fingers except the thumb, after that shake hand in an up and down movements several times.

Hai una sigaretta? – Do you have a cigarette?

Index and middle finger form a V shape pointing upwards as the hand is brought towards and away from the mouth.

With the arm outstretched and the hand flat, move your wrist up and down. This can be used either ironically or maliciously.

Accidenti me! / Ho fatto una stupidaggine! – Damn me! / I did something stupid!

Tap your forehead with the palm of your hand.

Quickly tip the head backwards while making a ntze noise with the mouth. In Southern Italy this means ‘no’, in Northern Italy it means ‘get lost’. 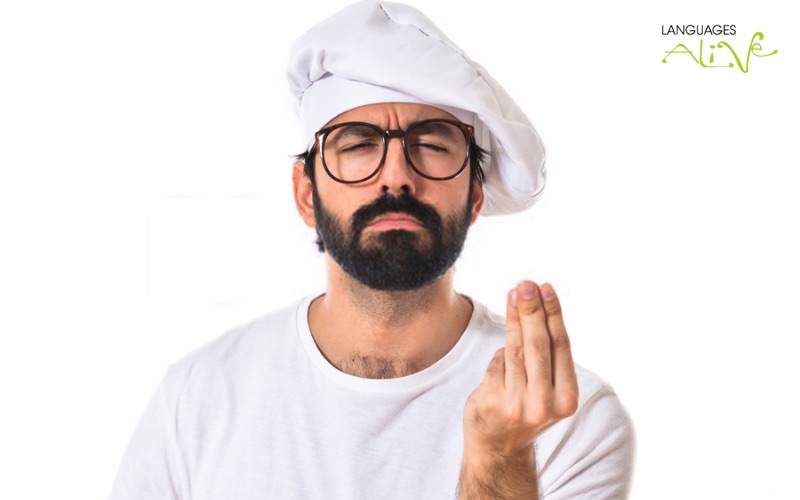 A couple of profanities, or sort of…

One arm bends facing upwards, the other slaps the crook of the bent arm’s elbow.

It works on a sliding scale of offensiveness depending on the circumstance. At worst it’s a substitute for the F word, at best it’s a subtle way to tell people to forget it or go to hell.

No, in Italian making the horn with your hand doesn’t mean ‘rock on’. In Italy this gesture is a sign you’re hoping for good luck, similar to the more internationally recognised crossing fingers. Le corna (horns) invoke bull-like strength and they’re thought to ward off il malocchio (evil eye) – any kind of curse or ill fortune.

This gesture can also be used to offend someone or ask them to get lost, when words are not enough to communicate your sentiments towards them!

Learning Italian doesn’t have to be difficult, let me take you on this beautiful learning journey. Click here for more information about our private online or face to face lessons. Free consultation! 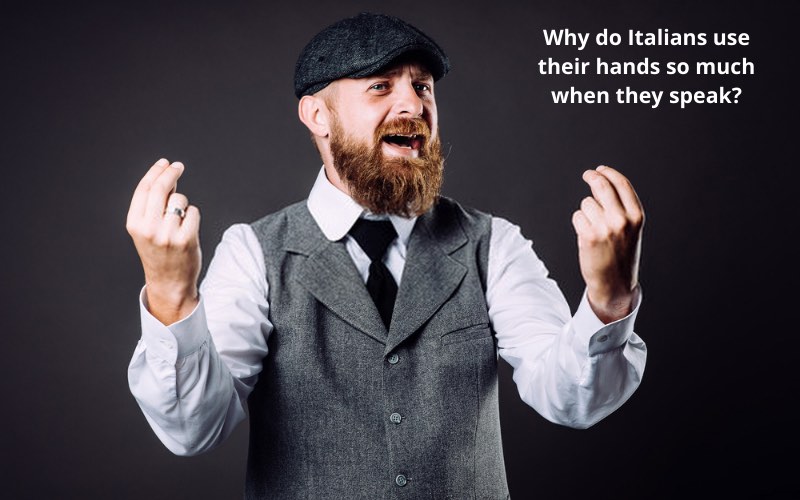 When Italians speak, hands say it all!

As already mentioned in my previous article, Italians are well known for being extremely expressive and creative in everything they do, first and foremost in the way they speak. The Italian language is so rich, melodic and imaginative, and is always accompanied by those theatrical gestures and body expressions that by now are universally recognised as a peculiar distinctive trait of ‘being Italian’.

The body language is for Italians a proper second language that is either used to accompany their words or on its own.  While talking, there is so much going on at a non-verbal level, such as faces twisting into funny expressions and hands flying in the air making unmistakable signs. Italians are real masters in body language and gesturing seems to be for them a natural instinct.

In a study of few years ago, Isabella Poggi, a professor of psychology at Roma Tre University and an expert on gestures, identified over 250 gestures that Italians use in the everyday conversation. Yes, 250! This means that technically speaking there is no conversation that an Italian runs without using at least one of these numerous gestures. So, if you are studying Italian and planning to visit Italy soon, it is undoubtedly important to learn some basics of grammar and vocabulary, but it is also extremely useful to know how to recognise, interpret and replicate the Italian gestural language. 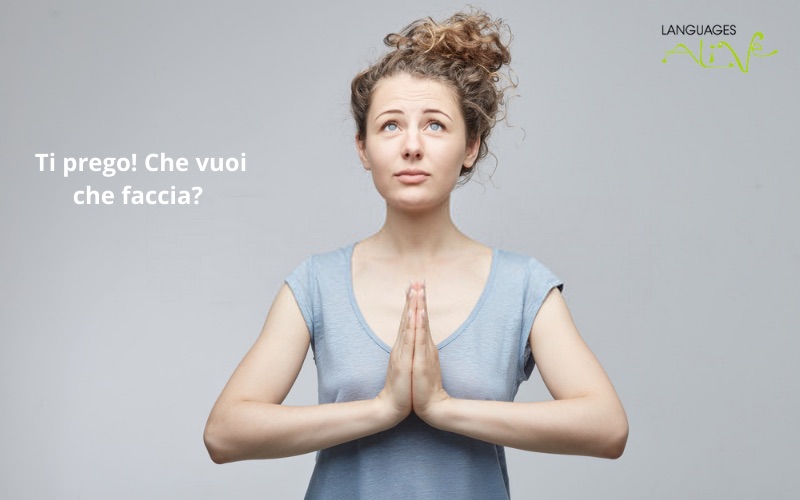 Where does this habit come from? Why do Italians use their hands so much when they speak?

Linda Falcone, an Italian author and teacher, maintains that Italians speak with their hands because they are, in their quintessential nature, all artists. According to this theory, this peculiar non-verbal communication is due to the urge that Italians have to create with their hands, to paint, sculpt, draw. When they do not have canvas and brushes, marble and chisel, they end up moulding air with their fingers.

In this quite poetical interpretation, the innate Italian creativity is seen as the explanation of something that seems to be for them as innate and natural: the gesticulation.

A bit of history about Italian gestures

Some scholars maintain the thesis that the origin of the gesticulation habit can be traced back the Greek colonisation of Southern Italy. At that time, cities were extremely crowded and body language was particularly important to catch each other’s attention at all levels.

According to other studies, the inhabitants of the peninsula developed a special language made of gestures and signs between the 14th and 19th century, when they were constantly in contact with speakers of different languages. In fact, large sections of the territory that nowadays corresponds to Italy, was occupied by foreign powers such as France, Spain and Austria.

Whichever is its historical origin, the habit of communicating with body, hands and face expressions has become synonym of ‘being Italian’. Italians constantly use these two different types of languages when communicating: the spoken and unspoken, the verbal and non-verbal intertwine and alternate, creating a communication behaviour that distinguishes them from the speakers of any other language and makes their conversations interactive, colourful and almost theatrical.

As above-mentioned, there seem to be over 250 different gestures normally used by the Italians; here below, I am going to enlist and explain how to replicate some of the common ones. Hopefully, after reading this article, not only you will be able to easily spot them while having a conversation with an Italian, but you will also learn how and when to use them. Just a tip: before unveiling your new wordless vocabulary on your next trip to Italy, you might want to rehearse these gestures with some Italian friends or acquaintances. You don’t want to say – without actually saying – the wrong thing and fare brutta figura (make a bad impression)!

Interested in learning or improving your Italian skills for free?

20 interesting facts about the Italian language