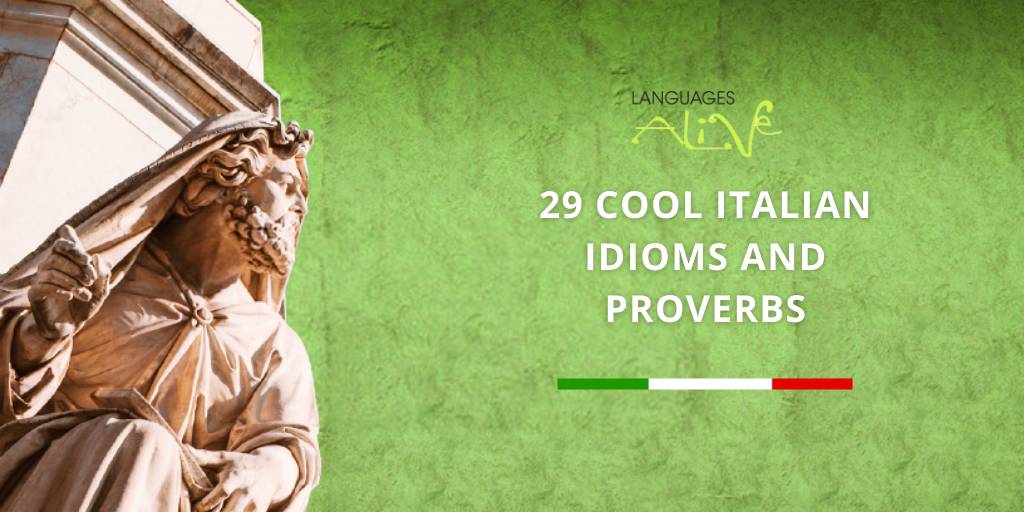 It is well known that Italians tend to be to very expressive in everything they do. There is always so much emphasis, pathos and passion going on! Think of the way they express themselves in the arts, food or just in the way they speak – with the addition of all those theatrical gestures!

The Italian language is just as expressive as the Italians are: such a rich, melodic and colourful language that is also full of idiomatic expressions, sayings and proverbs commonly used in the everyday conversations.

Some Italian sayings and proverbs have pretty sharp cultural or regional bounds, so it is quite difficult to figure them out without an in-depth knowledge of the Italian culture/background. Very often, even Italians struggle to understand when coming across a proverb or an idiomatic expression that has specific regional/local origins!

If you are learning Italian bear in mind that of course, grammar and vocabulary are obviously indispensable tools, but it is also very useful to know and learn those typical expressions and proverbs that the native speakers widely use often in every conversation.

As it is pretty challenging to put together a comprehensive list of all the Italian saying and proverbs – there is literally one for every situation; I’ve decided to share with you just a small selection of the ones that are actually part of my every day conversation when speaking Italian.

“In bocca al lupo” literally means “to be in the wolf’s mouth”. Italians normally use this expression when they wish each other good luck. Bear in mind that you are not allowed to respond to this special “good luck” with a simple “thank you”: this would actually bring you bad luck! You are required to say “Crepi” or “Crepi il lupo”, which literally means “I hope the wolf dies”. Well, it makes sense, right?

“Non vedo l’ora”, literally meaning “I don’t see the hour” corresponds to the English “I can’t wait”. In Italian we use this expression when we are particularly excited about an event soon to come. In that moment, time is not relevant; Italians just really want to do something, and asap! 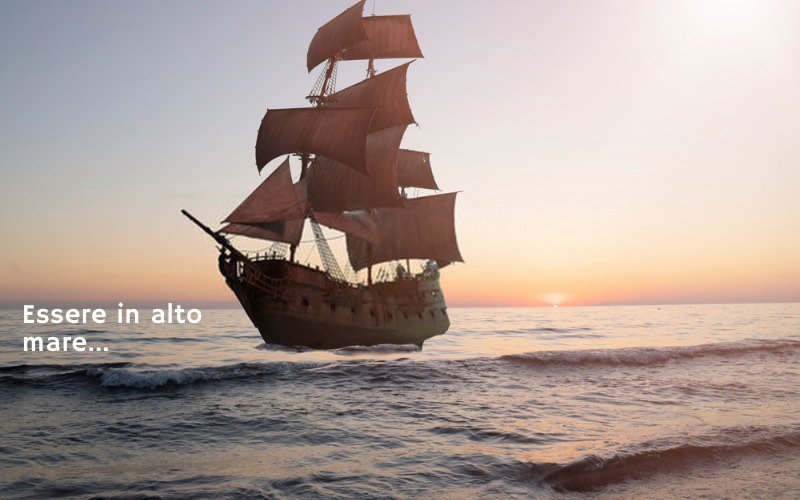 “Essere in alto mare” literally means “I am on the high seas”. You can use this expression when you are in the middle of a project, for example, and you still have a long way to go before finishing it.

This saying literally means “to be in leg” and it is normally used to describe a person that is particularly smart, well-informed or good in what they do.

“Non avere peli sulla lingua” literally translates as “not having hairs on the tongue” and it means “speak up / be straightforward”.

This is a sarcastic Italian expression that translates as “you wanted the bike? Now you’ve got to ride it!”. This is very similar to the English phrase “I told you so”.

“Acqua in bocca” literally translates “keep the water in your mouth” and actually has the meaning of “keep it to yourself”. That’s pretty obvious: with water in their mouth, nobody is able to speak. Your secret is safe!

This popular proverb literally translates as “kill two pigeons with one stone”. This is used to say that someone succeeded in achieving two things in a single action.

In English you can translate this expression with “I am not in the mood”. You can use it casually as a response to a request when you’d like to say that you don’t feel like doing something. 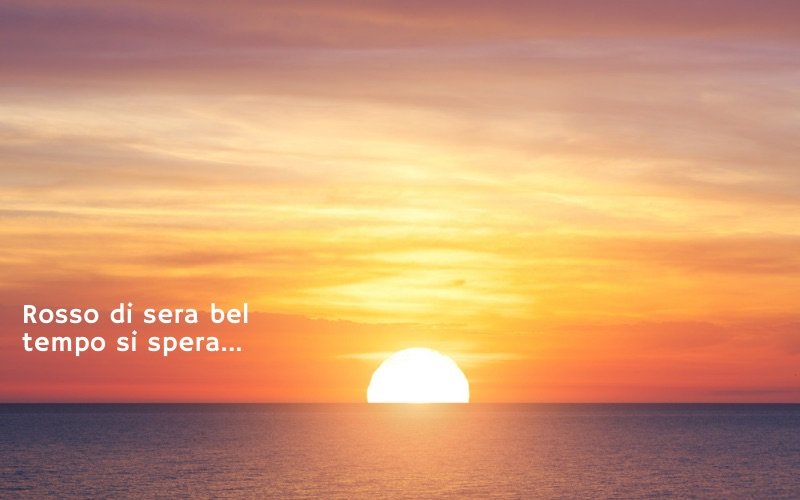 This saying has very ancient origins and it is a nice and a poetic way to predict the weather. Its literal meaning is that if you have a red sunset at night, then you are likely to have good weather tomorrow.

This proverb is an appeal not to lie because “lies have short legs”. This means that lying will not get you anywhere because lies have “short legs” and so they cannot go a long way and won’t last long.

This expression literally means “it always rains on the wet” and the closest translation in English is “when it rains, it pours”. While in English this sentence has just a negative connotation implying that things keep going wrong for someone already unlucky, in Italian “piove sempre sul bagnato” can have a positive connotation, too. It also means that things keep going great for those who have already had good luck.

This proverb literally means “everything left is lost”. If you haven’t been able to seize an opportunity when it arose, you will most likely miss it forever. It’s also used as an exhortation to take the chances when they arise, without pondering and procrastinating.

I love this proverb, I find it so funny! It literally means “you can’t have a barrel full of wine and a drunken wife at the same time” – meaning, most of the times you can’t have all you want simultaneously: to get something, you need to give up on something else.

This proverb corresponds to the English “it’s of no use to cry on something that you can’t change”. What is done is done. 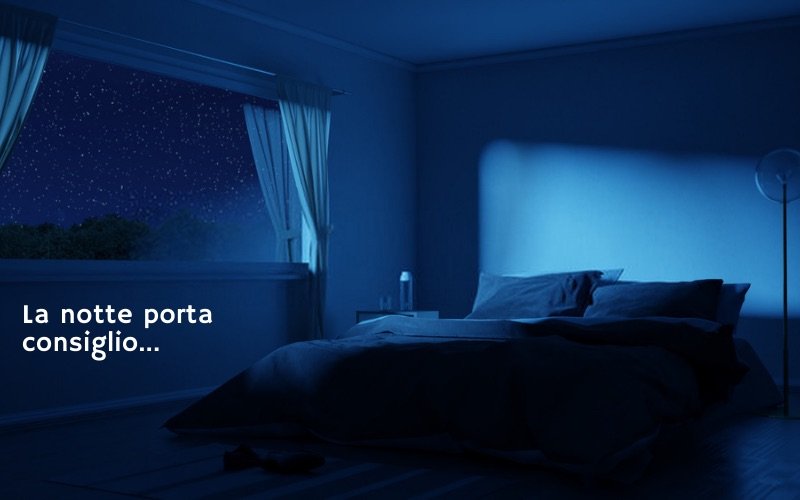 This expression literally means “night brings advice”. Most of the times this is very true: if you had a challenging day or you need to take an important decision, sleeping over it and take your decisions in the morning with a fresh mind is the best thing you can do.

This saying literally means “a guest is like the fish, after three days it stinks”.

I mean, tell me that it is not true!

“Better alone than in the bad company”: sometimes it is much better to stay on your own than in company of someone not worthy your attention or potentially harmful. 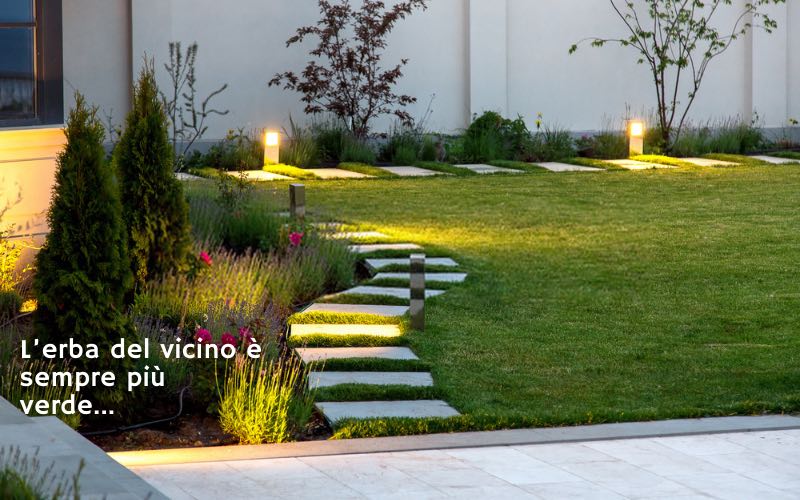 “The grass is always greener on the other side”. “L’erba del vicino è sempre più verde” means that sometimes we might think that our friends or neighbours verse in a better situation than ourselves, even though this is not true.

“Don’t look a gifted horse in the mouth”. This proverb means that every gift you get can be useful and has to be appreciated. So, judging and checking its quality not only would be rude, but could also turn against you. This proverb finds its origin in the old times habit of checking the horse teeth to be able to esteem its age.

“A buon intenditore poche parole” corresponds to the English “a word to the wise”. When someone is smart and intuitive, they do not need many explanations to understand something.

“Chi dorme non piglia pesci” corresponds to the English saying “you snooze, you lose”. So true.

This proverb corresponds to the English “old habits die hard” and it means that is very hard to eradicate old bad habits or vices that are already part of our nature. It literately translates “The wolf loses his fur, but not the vice”. 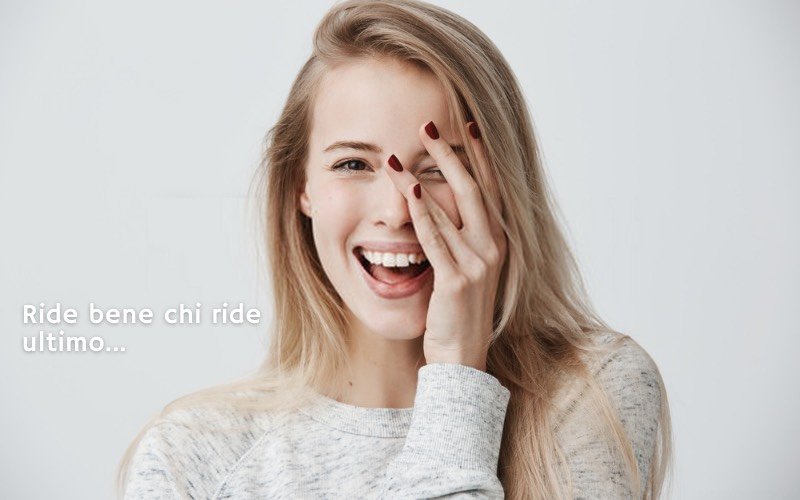 “Ride bene chi ride ultimo” literally means “who laughs last, laughs best”. This proverb is a sort of warning: you should never rejoice and celebrate before what is going on has come to an end, even if it looks like everything is turning to your favour.

“Tra i due litiganti, il terzo gode” means “two argue and a third benefits”. When two people argue over something, most of the times there is a third person who prevails, because they wait for the moment of most weakness or distraction of the other two in order to take advantage and win!

“Non è tutto oro quello che luccica”, literally means “all that glitters is not gold”. This proverb is used as a warning to avoid beingsuperficial and to be careful when judging someone or something from the appearances. The first impression could be misleading.

There are several Latin sayings that survived in contemporary Italian and are still largely used. “De gustibus non disputandum est” means that everyone is different and so has different tastes that do not have to be argued. We should be tolerant and respect other people’s feelings, interests or inclinations.

Lastly, I would like to point out a saying that I do not normally use but that I particularly love: “Mangia bene, ridi spesso, ama molto

This is definitely the quintessential Italian saying as it says so much about Italians and what means being Italian; in such a short sentence you basically have all that really matters for the Italian people. It translates to “eat well, laugh often, love much” and beautifully communicates the hearty passion that Italians hold for food, life in general, family and love.

You should take it as an advice: “Mangia bene, ridi spesso, ama molto”. Sounds good doesn’t it?

Subscribe to my YouTube channel: https://www.youtube.com/channel/UCaVwBqct6-Tb1swX4s_9-1A  and learn the basics of Italian in authentic Italian contexts. Find yourself at the Italian farmer market, making Nonna Lena’s ciambellone and more!