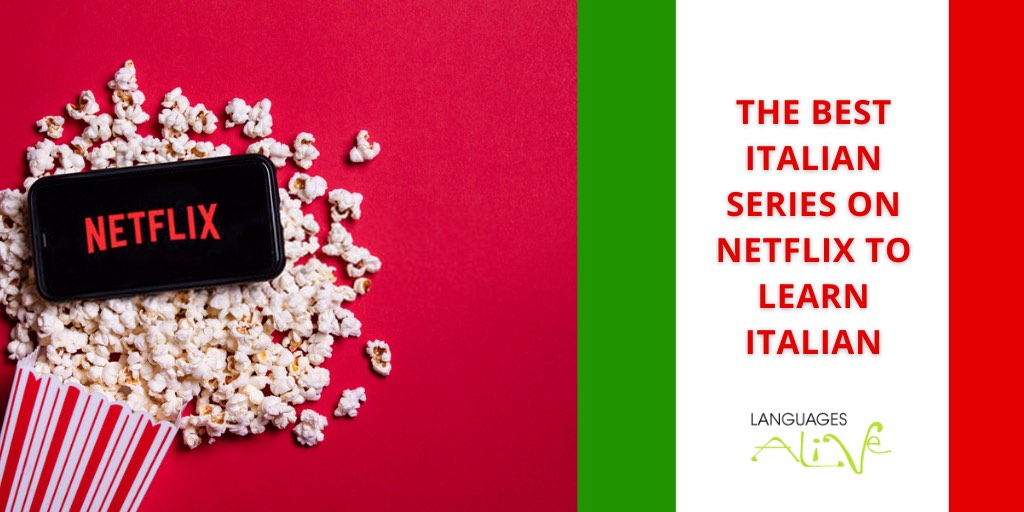 Netflix and Chill (But Make It Italian!)

Breaking News! No time to feel ashamed anymore: autumn has officially started and with it the official Netflix and Chill season! You can finally indulge yourself in hours of ‘dolce far niente’ without worrying about being judged. Picture yourself: sofa, warm blanket, your favourite snacks, a hot tea (or a glass of Italian wine), the rest of the world outside your door…Ho, tell me that this is not Heaven!

But if you are still feeling guilty for spending most of your free time doing absolutely nothing, vegetating in front of the screen (eating your weight out in junk food), I might have the perfect solution for you.

What if I tell you that there is a way to Netflix and Chill while feeling productive – and so guilt free – doing something that is actually fun and could be really useful for you? What I am suggesting is to start watching movies and series in their original language, in our specific case in Italian.

Watching a movie or a series in Italian will offer you the opportunity to get in direct contact with authentic Italian, by witnessing first hand pronunciation and body language. It will feel like being sitting in a coffee bar in Rome or Milan, listening to people around you having different conversations, while sipping your espresso – but from the comfort of your sofa! Intriguing, right?

This unique and fun way of learning offers you a proper experience that would be impossible to get when reading a textbook or attending a standard class. This is the closest thing to actively spend some time in Italy with native speakers that you can think of! Interactive conversations are key to taking on a board a second language.

Hence, watching movies/series in their original version is definitely one of the most convenient ways to learn a foreign language, especially if you are a visual learner, as this gives you the chance to analyse the way the actors carry the language through conversation and express their personality through their body language and mannerisms.

Another important aspect is the pronunciation of the words: not only you will have the chance to listen to the actors pronouncing the words in the correct way but, at an advanced level, you will be even able to spot their different accents and so from where in Italy they come from. Bear in mind that in Italy we have hundreds of dialects that highly influence our accent and pronunciation, even when speaking in proper Italian.

Now that you know the trick, it is time to pick the right Italian series for you to watch! In the following list I’ve tried to include productions of different genres so to satisfy different taste and interests. I have to be honest with you all: I watched most of the series that I’ve included in the list – yes, I know, do not shame me! – and I really hope that among my selection you can find your perfect series to Netflix and Chill the Italian way.

Extra tip: to make the experience even more authentic, I also suggest you to get some Italian snacks to munch in front of the screen.

Baby is a thrilling teen drama. The story is about two students of an elite high school living in Parioli, an elegant neighborhood of Rome, who get involved in prostitution. It is loosely based on the story of two high school girls that back in 2014 got involved in an underage prostitution ring (the “Baby Squillo” scandal).

Suburra is the first Netflix Original produced in Italy. Inspired by the film and book Suburra, by the acclaimed Italian writer Roberto Saviano, it tells the story of various characters involved in the criminal, political and ordinary life of Rome.

Carlo e Malik is a crime drama that follows the story of a veteran detective from Rome who holds plenty of prejudices against the vast immigrant community living in the city. He ends up working in team with an Ivory-coast born officer and together they have to resolve a series of murder cases connected with the subculture of immigrants in the capital. Immigration and its political and cultural implications are the focus of the series.

La Luna Nera was released just last year and is the first Italian fantasy show on Netflix. The story is set in the 17th century: a 17-year-old finds out that the members of her family are witches. To make things even more complicated, her boyfriend’s father is a witch hunter – no wonder who is hunting for.

The Medici is an Italian and British production and so the series has been shot mostly in English. Nevertheless, the Italian dubbed version is extremely good and the show had a lot of success in Italy.
The Medici is an intriguing historical drama series that tells the story of the rise and fall of the Medici family, the most powerful family of the italic peninsula at the time of the Italian Renaissance. The series is a motion portrait of how life used to be at those times, the wars, the political intrigues with the Vatican state and the strong ties of the Medici Family with the most prominent artists of the time, such as Michelangelo, Raffaello and Leonardo.

Generazione 56k is a fun series about Matilda and Daniele, who met when they were teenagers and the Internet was still only available at work or via slow modems (from whom the title of the show). They start dating again in their early thirties after a chance encounter and thanks to the internet – that now is totally different from its early days and has completely changed the way our lives.

Sotto il sole di Riccione tells the story of a group of teens that, while vacationing on the beaches of Riccione (a famous holidays destination on the Adriatic sea) become friends, help each other manage romantic relationships and summer crushes, fall in love (of course!), have some proper summer fun.

Summertime is a teen drama, perfect if you are looking for something easy to watch. Set on the Adriatic coast, the series is about the love story between Summer and Ale, two young people with opposite personalities and lifestyles.

Zero tells the story of Omar, a second generation Italian boy of Senegalese descent who lives in a public housing in the suburb of Milan. Omar loves to draw and he is shy to the point of feeling invisible: this turns into an extraordinary superpower, which makes him actually invisible when feeling strong emotion. His story is intertwined with the lives of other kids from the same housing who want to preserve their homes and neighborhood that is threatened by building developers.

Curon tells the story of Anna, mother of two teenage twins – Daria and Mauro, who after many years decides to return to her home village, Curon, in northern Italy. Once there, Anna mysteriously disappears and the teenagers begin to desperately search for her. Daria and Mauro then find themselves involved in a labyrinth of secrets and mysteries.

Il processo is the story of a group of characters implicated in the brutal murder of Angelica, a 17-year-old girl involved into something bigger than her. They all walk on a razor’s edge searching for the truth, waiting for a verdict, which will establish, in a way or another, a new course for their lives.

Vendetta: Truth, Lies and the Mafia

Vendetta: Truth, Lies and the Mafia is a documentary series about the people battling the organised crime in Sicily – and specifically, two controversial figures who have a little bit of notoriety themselves. One is a self-appointed TV journalist and the other is an official with the power of the state behind her.

Luna park is a brand new series released just on the 30th of September.
Set against the vintage atmosphere of the bygone era of 1960s Rome, the story is about a free-spirited young woman who’s grown up at her family’s circus and unexpectedly discovers to belong to two very different worlds. This is a pretty short series of just six episodes, but it is full of intrigue, love and secrets.

SanPa: Sins of the Savior

SanPa: Sins of the Savior is a Netflix Italy original documentary series. This historical drama is set in the backdrop of the 1970s world heroin crisis and follows the controversial story of Vincenzo Muccioli, a man who took it upon himself to save people who got severely involved with drugs. Muccioli set up different camps and founded the famous San Patrignano rehab community.

In no time, he started to be considered as a savior and people began to worship him and his work. However, tables turned when the government discovered that Muccioli was actually using illegal techniques to help his victims. Two judicial trials followed and his image of philanthropist started to dwindle.

Is it worth learning Italian before going to Italy?

Italian definite articles and how they work