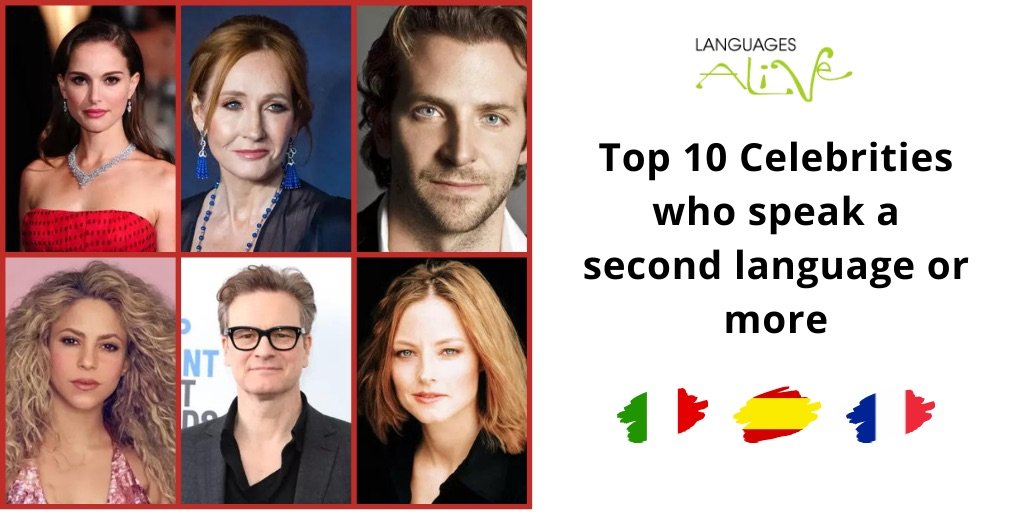 For many celebrities language learning is a crucial part of their lives and careers. Sometimes, they need to learn a foreign language to fit into a character, to better communicate with their audience and/or easily connect with their fans. Sometimes they study a foreign language to improve their employability. In any case, foreign language learning gives them also the chance to develop culture awareness, better integrate in the host country and connect with a wider audience. They have discovered the enormous benefits of learning a second or additional language. So can you,  find how https://www.languagesalive.com/best-online-language-lessons/

Some celebrities are proficient in more than one or two foreign languages and sometimes more than five.

So let’s discover them!

If it wasn’t enough for her to have hips that don’t lie and be married to the famous footballer, Gerard Pique, she just had to take it to another level by speaking six languages. She learned Portuguese after touring Brazil at the beginning of her career and improved her English skills while she had an American boyfriend. What can we say; Shakira you are a super cool polyglot!

If it wasn’t enough for Laura Pausini to have ability to enlighten the world with the sound of her wonderful voice; she stepped up by speaking 5 languages. Aside her mother tongue Italian, Laura Pausini is fluent in English, Spanish and Portuguese and she also have a good knowledge of French.

Like Shakira, she doesn’t only speak different languages, but she also sings using them.

What can we say; the singer has a strong willingness to connect with her fans all over the world and that is why is adored especially in Italy, Spain and Latin America.

#3 Bradley Cooper is fluent in French

According to People magazine, Bradley Cooper was first inspired to learn French after watching the film “Fire in the Chariots.” As he puts it: “there’s a scene where a guy speaks French and I’m like, ‘Man, this sounds so cool.'” He graduated in English, but also majored in French in Georgetown. He also took advantage of a six-month exchange program in Aix-en-Provence, France, where he lived with a host family.

Bravo, bravissimo to Colin Firth, who has an advanced level of Italian; ok his subjunctive is not perfect, but who said all Italians can speak correctly? What about learning Italian as a romantic gesture? Colin did, so can you; learn how to flirt in Italian here https://www.languagesalive.com/how-to-flirt-in-italian/

He sounds like Will Smith really enjoys speaking Spanish!

Since 2000, He has been giving interviews in the Spanish language and charmed the whole Hispanic world. He was also praised for his Spanish speaking role in the film “Seven pounds”

Gwyneth fell in love with the Spanish language and culture when she was just a teenager and took advantage of a school exchange program in Spain where she lived with a host family. Doesn’t she sound Spanish?

Well, Sandra learned German in her childhood from her mum who was German.  In a way she had kind it of easy as we know children learn languages very differently from adults.  However, one has to recognise her commitment and passion who has allowed her to keep her German at a bilingual level.

Also, praises to her mother Helga Meyer who understood the significance of giving her child the gift of a second language.

The 33-year-old actress is a graduate of Harvard University and has won a Golden Globe and an Oscar. She was born into a Jewish family in Jerusalem and speaks fluent Hebrew. She also speaks English French, Japanese, German and Arabic. She has had a great passion for foreign languages ​​since she was a child.

JK Rowling holds degrees in French and Classics; and spent a year studying in Paris. Her knowledge of the language is actually evident in the many fictitious words and names she inserts into French-based stories. For example, Beauxbatons, meaning beautiful wands, Fleur Delacour, from “fleur”, meaning flower, “delacour”, meaning “of the court”, and Malfoy, from the French expression “mal foi” (meaning bad faith).

Super smart Jodie Foster was fluent in French while attending French Prep School in Los Angeles. As a teenager, she traveled and worked frequently in France, expressing her lines in the films “Moi, fleur bleue” and “A Very Long Engagement”. Foster also speaks some German, Spanish and Italian.

This list is not exhaustive of course; there are many more celebrities who speaks an additional language or languages. It’s your moment to shine now and start your amazing language learning journey.

You can also book your 20 minute free consultation at raffaella@languagesalive.com

Italian, Spanish, French and English as a second language are availbe